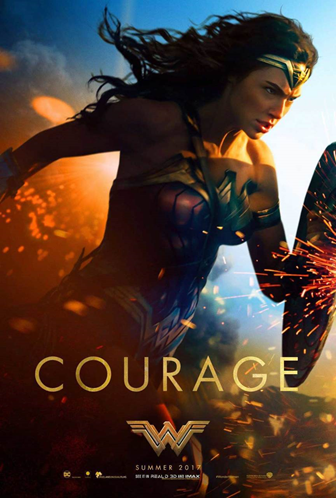 Ask yourself, which of our celebrity masks might you be wearing at the Christmas fancy dress party this year? Have you already decided who you may be going as, or are you still that little bit unsure? Read on for some great inspiration.

Here we look at our favourite films of 2017 and as the year draws to a close we can gain inspiration for our party costumes and celebrity party masks from one of the many great movies we’ve watched over the previous months. Your costume is bound to wow and be instantly recognisable if you pick somebody current and well known, and these films are bound to give you some great ideas.

A great film grounded on female empowerment and thrilling action from the DC stable of superheroes. Nobody fails to notice Wonder Woman! (Be sure to check out our collection of stunning original posters for the movie and more)

A uniquely gripping tale of a getaway driver, who, through trauma-based tinnitus, is forced to live and work to a playlist on his iPod. A movie that oozes cool, and great production, the tempo and dialogue of the piece falls into place with the track listing. Stuck in a life of crime, Baby, the lead character, is doing all he can to extrapolate himself from the same.

A great sequel to the thrilling adventures of hired gun John Wick. It’s made even better still because there is no real need to have seen the original to enjoy Chapter 2. You can be engaged throughout with fight after fight and a mounting body count, if that’s your thing. Keanu Reeves stars as Wick and is clearly not somebody to be messed with!

The ruthless killers are back in a series of films that harks back to the original Alien of 1979! In an age when sequels are mass produced for easy box office earnings, this (and John Wick 2) can stand up and be counted as fully justified and engaging.

Gritty and timeless tale of the WWII evacuation of Allied troops from Dunkirk. You might find the action harrowing at times, but lest we forget those that endured the harsh and bloody realities of war in an effort to secure our own futures. A graphic and compelling film.

Another re-boot of the Peter Pan story, with added Avengers thrown in for that true action adventure-loving film fanatic. Homecoming is perhaps one of the best incarnations of the web-slinger, and intrinsically weaves itself into the overall Marvel Universe. Great fun and very well done.

Whatever film you pick as your fancy dress and celebrity mask inspiration, make sure it’s fun and exciting so that you’ll be sure to bring that same positive energy to big night. That way, you can be sure the evening will be a hit.